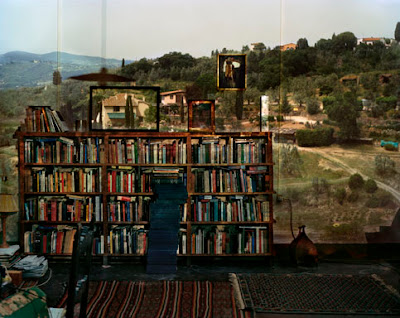 (or, ‘Couldn’t something temporary be done with a teapot?’)

For starters, a sentence, a question, from the early pages of The Uprising by Franco ‘Bifo’ Berardi, a book a friend sent me I think because of the subtitle, ‘Poetry and Finance’, which suggests something useful to my predicament (or one of them): ‘How can we think of a process of subjectivation when precarity is jeopardizing social solidarity and when the social body is wired by techno-linguistic automatisms which reduce its activity to a repetition of embedded patterns of behaviour?’

I haven’t got much further. I like the deep orangey-yellow cover. I keep thinking I should go further – I suspect there’s an intelligence operating here on a range of topical matters that interest me – but it’s an effort. I may just give up, because the end does not justify the means, ever.

I hadn’t fully realised what a sensitive and sheltered soul I am, how allergic to bad prose, until my past few months as a novice RLF Fellow – that is, as a writer embedded in an academic institution whose role is to advise students on their written work. There are exceptions – the Swedish History MA student whose prose lightens my mood for the whole day – but most of what’s offered across the desk makes me flinch. We find a level, the student and I, at which we can talk, and this can be fun and enlightening, but when we look again at the prose we’re back to hard labour and soon reach a point at which I suggest that I don’t think I offer any more help. Sometimes I ask: What writers do you read for pleasure? They look at me as if I’m mad.

Here’s the rub, of course. I’m of the last generation in Western history which, as children, when there wasn’t much going on and it was raining outside, picked up a book. What else was there to do? Television barely existed; some card games; no internet, no games consoles. No one cooks well until they’ve eaten good food; no one writes good sentences until they’ve read those of others. The reading lists given to the students I encounter don’t make up for that. The research for many of their essays is focused on papers in academic journals whose main message is that reading neither is nor can be a pleasure.

(In the given conditions, I doubt that the written essay, a thing culturally specific to the UK and US education systems and wholly alien to students arriving out of many other systems, even within Europe, is in most subjects an appropriate main means of assessing a student’s intelligence and potential. But that’s an aside.)

Obvious statement: if reading isn’t central to the culture – I mean reading freestyle, reading beyond anything one is required to read for specific purposes – then there’s no hope that good writing will be. And even before, well before, the library closures, it was clear that reading isn’t central. So-called literary fiction gets column inches, but Philip Roth’s 2009 prediction that its reading will soon become ‘cultic’ – ‘Maybe more people than now read Latin poetry, but somewhere in that range’ – may already have come about. Poetry, poetry written for the page, hasn’t been even near central for decades, and never will be again. (So why – obvious question – am I a book publisher? You might as well ask how can we think of subjectivation when precarity is jeopardizing social solidarity. I did mention pleasure, I think.)

To set against the above, three writers read this year, and none of their books exactly new. Denis Johnson’s Train Dreams, first published in the UK in 2012 but first read by me in a 2005 Paris Review anthology; it’s been reviewed, but no one seems to have noticed that it’s a kind of companion piece to Johnson’s equally concise and wonderful The Name of the World (2000), whose main character also has to deal with – but in this book in a contemporary academic setting – the violent deaths of his wife and daughter. A re-read of Renata Adler’s Speedboat (1977) and a first read of her Pitch Dark (1984): bliss. A late-arrival read – courtesy of the gift of the book by Helena Nelson: deep bows and salutations – of The End of Me (1968) by Alfred Hayes, who to me is a god.

Others too; the above are just those coming to mind this evening. Petrol by Martina Evans. Essays by Eliot Weinberger. I do tend to read off the side and behind the back of the prize shortlists, but not deliberately. The difference between what I can like and what I wholly surrender to seems to be this, whatever the genre: with former I have the feeling I’m being asked to admire – look at me, I’m writing a writing a novel/poem, see what I’m doing here – and with the latter that feeling evaporates.

Here is a link to this year’s TLS Christmas Quiz, set (as in past years) by Tony Lurcock. One review of Lurcock’s compilation of writing by British travellers in Finland, 1760–1830, published by CBe in 2010, mentioned that his own commentary is ‘at least as worth reading as the texts themselves’. A second book, covering the years 1830 to 1917, will be published by CBe in April.

The photo above is by Abelardo Morell. While the bird cooks, hours of pleasure may be spent exploring his photographs.