Agota Kristof’s novel The Notebook, translated by Alan Sheridan and reissued by CBe, has this sentence on page 15: ‘We smell of a mixture of manure, fish, grass, mushrooms, smoke, milk, cheese, mud, clay, earth, sweat, urine and mould.’

Kristof’s memoir The Illiterate, translated by Nina Bogin and published alongside the above and recalling her childhood in Hungary (she emigrated to Switzerland in 1956), has this on the first page: ‘My father’s classroom smells of chalk, ink, paper, calm, silence and snow, even in summer. My mother’s large kitchen smells of slaughtered animals, boiled meat, milk, jam, bread, wet laundry, baby’s pee, agitation, noise, and summer heat, even in winter.’

Andrzej Stasiuk’s Fado (Dalkey Archive, 2009), a collection of essays on the parts of Europe of which the Western bit has only skimpy knowledge, has this, of a village in the southern Carpathians: ‘Rasinari smelled of hot oil, fried onions, pig and horse manure, hay, and herbs. On hot afternoons this extraordinary combination made one’s head spin.’

And this, in the following essay: ‘What about the herds of cows returning at dusk from their pastures, lifting their tails and shitting in the middle of the village? What about the cattle smell, which reminds us of where we really come from? When that disappears, when it vanishes from out of everyday existence, there’ll be nothing left that is capable of assuaging our loneliness.’

More elaborately, this, from James Agee’s Let Us Now Praise Famous Men (1941): ‘The Gudgers’ house, being young, only eight years old, smells a little dryer and cleaner, and more distinctly of its wood, than an average white tenant house, and it has also a certain odor I have never found in other such houses: aside from these sharp and yet slight subtleties, it has the odor or odors which are classical in every thoroughly poor white southern country house, and by which such a house could be identified blindfold in any part of the world, among no matter what other odors. It is compacted of many odors and made into one, which is very thin and light on the air, and more subtle than it can seem in analysis, yet very sharply and constantly notable. These are its ingredients. The odor of pine lumber, wide, thin cards of it, heated in the sun, in no way doubled or insulated, in closed and darkened air. The odor of woodsmoke, the fuel being again mainly pine, but in part also, hickory, oak, and cedar. The odors of cooking. Among these, most strongly, the odors of fried salt pork and of fried and boiled pork lard, and second, the odor of cooked corn. The odors of sweat in many stages of age and freshness, this sweat being a distillation of pork, lard, corn, woodsmoke, pine, and ammonia. The odors of sleep, of bedding and of breathing, for the ventilation is poor. The odors of all the dirt that in the course of time can accumulate in a quilt and mattress. Odors of staleness from clothes hung or stored away, not washed. I should further describe the odor of corn: in sweat, or on the teeth, and breath, when it is eaten as much as they eat it, it is of a particular sweet stuffy fetor, to which the nearest parallel is the odor of the yellow excrement of a baby. All these odors as I have said are so combined into one that they are all and always present in balance, not at all heavy, yet so searching that all fabrics of bedding and clothes are saturated with them, and so clinging that they stand softly out of the fibers of newly laundered clothes. Some of their components are extremely “pleasant”, some are “unpleasant”; their sum total has great nostalgic power. When they are in an old house, darkened, and moist, and sucked into all the wood, and stacked down on top of years of a moldering and old basis of themselves, as at the Ricketts’, they are hard to get used to or even hard to bear. At the Woods’, they are blowsy and somewhat moist or dirty. At the Gudgers’, as I have mentioned, they are younger, lighter, and cleaner-smelling. There too, there is another and special odor, very dry and edged: it is somewhere between the odor of very old newsprint and of a victorian bedroom in which, after long illness, and many medicines, someone has died and the room has been fumigated, yet the odor of dark brown medicines, dry-bodied sickness, and staring death, still is strong in the stained wallpaper and in the mattress.’

As opposed to this, from Valeria Luiselli, Faces in the Crowd (2012): ‘The apartment smells of a mixture of uptown perfumery, make-up, newly ironed clothes and asparagus.’ 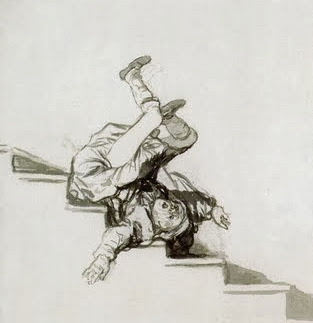 Nicholas Lezard, in his Guardian ‘best paperbacks of 2013’ piece (and Todd McEwen’s The Five Simple Machines from CBe is in there, I’m not going to not mention that): ‘Howard Jacobson has always said that the literary establishment in this country severely undervalues comic writing, and he’s right, but why? Why?’

Because, perhaps, of a lingering high-churchy notion that the proper realm of literature-with-a-capital-L is the big abstracts and if it makes you laugh it cannot (as John McEnroe said) be serious. (There’s something northern and Puritan about this: anyone know any good Scandinavian comedies?) So the writers who consistently make you laugh are placed in an annexe (lit-lite) behind a door labelled ‘comic writers’. Which is daft, because all good writing includes comedy. Beckett is funny; Chekhov is funny; Pinter is hilarious. But still now, if I laugh aloud during a performance of their plays I get the feeling I’m being looked at as the man in a Bateman cartoon.

Sue Townsend once said that at the age of 13 she wanted to write like Dostoievsky; then she grew up, and wrote the Adrian Mole books. Through my own teens I locked into Shakespeare’s tragedies; David Warner’s surly-student Hamlet at the RSC in 1965 was a key moment (though Hamlet is often very funny too: I guess I skipped those passages at the time); now, I’d much rather the comedies. Tragedy for adolescence and comedy for maturity is too simple, but how they differ is this: tragedy is threatened by comedy; comedy lets everything in. Everything. See Roberto Benigni’s Life is Beautiful. Or the reporter John Gale (in Clean Young Englishman, one of my favourite two memoirs from the last century) visiting a concentration camp in 1945: ‘The sun shone, the earth breathed, and against a line of dark pine trees this pale girl in the grey SS uniform carried the remains of what had been human beings and loaded them into trucks for burial. I felt then I could never make love to a German girl. I remember noticing that the trousers of the SS men had stitched creases: a practical device.’ That last sentence is brilliant detail: how, as a man aged 20 and interested in girls and making a good appearance, do you keep the crease in your trousers, and here’s one answer, learned at a concentration camp. And the detail – the snotty handkerchief kept up the sleeve of the sneezing priest, the one thing I remember of the service in which several of my school peer group were taking their first Communion – is comic.

Comic writing is not about playing it for laughs – when that happens I feel I’m being manipulated. It’s to do with staying close, not over-pitching, not trying to be literary, and it’s do with a cast of mind that’s inclusive: death and war, yes, but also farts and banana skins, in one single package. Comic writing of any worth = good writing. And vice versa. Standard advice for a man trying to woo a woman is to make her laugh, or smile at the least. Endorphins get going. Same goes for writer wooing reader, if the reader is me. I don’t mean you have to tell me jokes. But sentences shaped with wit and delight, yes.

(The picture above is by Goya. As also the below: ‘Man looking for fleas in his shirt’.) 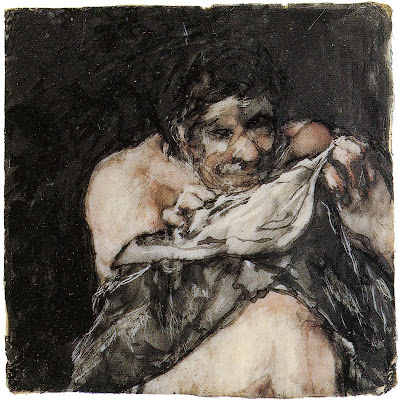