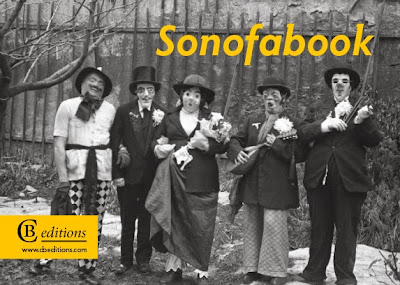 When I collected the first four CBe titles from the printer back in the autumn of 2007 I had no distributor, no trade representation, no mailing list, and the authors were all unknowns. I put sample copies in a bag and trekked around some of the independent bookshops in London. One bookseller read one of the books overnight and phoned next day with an order for 40 copies. Crockatt & Powell (remember them?) enthused about the books on their blog and also ordered. We were in business, almost.

The good will, experience and enthusiasm of independent booksellers are undervalued and underused by most publishers.

The new magazine being started by CBe – more details here – will be carrying paid-for adverts. Almost no independent bookseller has a budget for advertising. For the first issue of the magazine (and maybe others: we’ll see) I’m therefore offering a limited number of free quarter-page ads to independent bookshops. Two or three or four pages of adverts for good bookshops will be a good thing in itself; and maybe, even, the bookshops will stock the magazine. Any bookshop that is interested, please contact me on info@cbeditions.com. Files (82 x 53 mm; high-res pdf or jpeg) will be needed before the end of October; or a bookshop could simply send me the information they’d like the ad to carry, plus a logo if available or other artwork, and CBe will make up the ad.

New Dan O’Brien; and ‘the necessary drudgery of the novelist’

Dan O’Brien’s new poetry collection Scarsdale will be launched at the Aldeburgh Poetry Festival in early November, where he’s reading as the winner of the 2013 Aldeburgh Fenton First Collection Prize for War Reporter. You can do these things by the book – which involves having blurb and cover and proofs in place many months before publication (and in time for the submission deadlines for the PBS recommendations, etc) – or you can think, a few weeks from now the author will be over from Los Angeles and reading in front of a large and generous audience, so let’s wing it. Scarsdale is a very different book from War Reporter: it’s home-grown, for a start, though of course home can be as conflicted a place as any war zone.

On Friday of this week, I and May-Lan Tan will be reading at the Cork International Short Story Festival. I haven’t been to Ireland for a couple of decades, at least. I’m excited about this.

May-Lan will be reading, I assume, from her CBe book Things to Make and Break and maybe from her chapbook Girly. I might be reading from The Manet Girl, published by Salt last year. More likely, the pages in front of me will be from what is resulting from finding my failure to write a particular story more interesting than the story itself.

As a lapsed poet, I’m still finding my way in fiction. I remember an agent’s note, handwritten in the margins of the printout of my first attempt: ‘Where are they? The reader needs to see them.’ They – the characters – were in the Golborne Road, as it happens, which is at the tag end of Portobello Road and is probably worth describing (junk stalls, cafés, Moroccan street food) but I got no enjoyment at all from this kind of writing (and if I’m bored, then God help the reader). I’m aware that good descriptive writing isn’t just scene-setting, but it still felt more duty than play.

Virginia Woolf in her 1924 essay ‘Character in Fiction’ has fun with Arnold Bennett’s descriptive writing, of which she quotes a chunk and adds: ‘One line of insight would have done more than all those lines of description; but let them pass as the necessary drudgery of the novelist … he is trying to hypnotise us into the belief that, because he has made a house, there must be a person living there.’ Into the category of necessary drudgery I’d add ‘characterisation’ and ‘plot’ and most of the other chapter titles in the how-to-write-a-novel books – but a lovely thing about the novel is that these things aren’t really necessary at all. Short-cutting, I’ll point to Gabriel Josipovici’s ‘Writing, Reading and the Study of Literature’, his inaugural lecture at the University of Sussex in 1986 (included in his The Singer on the Shore, Carcanet, 2006), in which he recalls writing his first novel: ‘It was not that that I didn’t like the forms of description I was using; I didn’t like any form of description. What’s more, I suddenly realised, I didn’t need it. What had happened was that I had adopted not just the tone and mannners of every book I had ever read, I had also adopted their assumptions … I had made a fantastic discovery, you see. I had discovered that I did not have to do do what I didn’t want to do to, and at the same time that I could do something which a moment before I had had no idea I could do.’ This is liberating, in the way that is characteristic of my own favourite novels: oh, so you don’t have to do all the high-cheekbones, blustery-weather stuff, you can do it another way.

Ninety years on from VW’s essay, the market into which novels get pitched is still deeply conservative: the choosing of what gets published, reviewed, wins prizes. But the novel is not ruled by the market. Kate Webb, reviewing Every Day is for the Thief in the TLS in July this year, suggested that Teju Cole’s work ‘occupies a now common ground of uncertainty in twenty-first-century writing, blending fiction, memoir, observation and conjecture’. Hari Kunzru, reviewing Ben Lerner’s 10:04 in the New York Times earlier this month, suggested that the book ‘belongs to an emerging genre, the novel after Sebald, its 19th-century furniture of plot and character dissolved into a series of passages, held together by occasional photographs and a subjectivity that hovers close to (but is never quite identical with) the subjectivity of the writer’. The precedents for this date back decades, but there seems now to be momentum, and this too I find liberating. 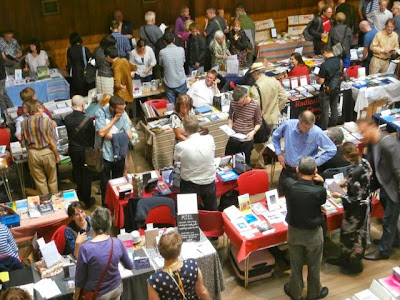 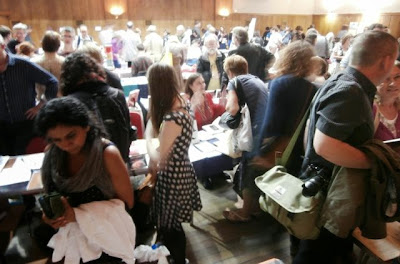 Top pic, near top right, the CBe table – no one behind it because I was, uh, at the opposite side of the room taking this photo. It took time to get back to it. Bottom pic, view from the CBe table. All those people. One person mentioned in passing, as if this was a perfectly normal thing to do, that she’d travelled from County Cork to London just for this event. Someone else I’d never met before offered to buy me lunch. There were readings, continuous through the day, both in a separate room in the venue and in the square outside, and then in a pub in the evening, but no speeches telling us what we were here for and why, no need. It felt like a good deed in a naughty world.
Posted by charles at 00:34 No comments:

– to the quiz posted on 21 August: here. Prize for competition with least entries: this one. I missed an obvious one (thank you, J.O.): Beatrix Potter’s The Tale of Little Pig Robinson, the story of the pig in Lear’s ‘The Owl and the Pussycat’.

If you like this kind of thing, go here; and check out his other riffs on zebra, joke, nail, lemon, mutt, etc.