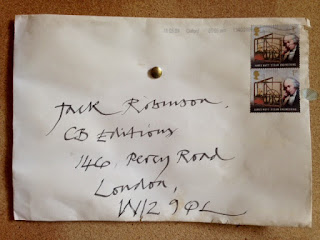 Those interviews with writers (or artists, film directors, etc) whose work (or public persona) is known for its bleakness: I like it when the interviewer finds it necessary to emphasise – often in the first para, and in a tone of happy surprise – that the given writer is, ‘in real life’, warm, funny, generous. Why shouldn’t or wouldn’t they be? While there’s a sense in which the work is the writer – it hardly ever turns out to have been written by the writer’s aunt or step-brother – it isn’t the work that opens the door and makes coffee.

I got sent a review this week of Jack Robinson’s about the same author, a slip of book I published with CBe at the start of this year. At around 2,750 words, it’s approximately half the length of the book itself. (It’s in the Cambridge Humanities Review, not online.) From it, I learnt some things about Jack. (Just as, a long time ago, I learnt things about my poet-self from a review of my last poetry collection: the reviewer pointed to a number of things in the poems which I hadn’t before been consciously aware of.)

I am, by the way, as well as being Charles Boyle (poetry and stories), Jack. And was briefly Jennie Walker (24 for 3, infidelity and cricket). Je est un autre. About the pseudonomy, just this: two of the first group of four CBe titles I published were written by me; I had no distributor, no plans to publish any more books; I knew that I was going to take these books into independent bookshops and say how wonderful they were and that the booksellers would ask who the authors were and that ‘me’ is not a persuasive reply, so the pseudonyms.

That’s about as pragmatic a reason as you can get, but of course it’s far from the whole story. (I doubt there is ever a story we can all agree upon. Or even a colour: it’s clear, as I discuss colours for the CBe covers, that one person’s blue is another person’s green.) The first pen-name was Jennie, and I can recall the tipping point exactly: writing a first-person narrative about a man between two women, I was labouring, but when – overnight – the ‘I’ became a woman between two men, the thing took off. It was liberating: suddenly, I was able to write in a way that I’d wanted but had previously been unable to.

Jennie was a means of escaping from the dull male poet I seemed to have become but who didn’t entirely convince me (so god help the readers). I have a pretty wavery sense of who I am. I think I’m shorter than most people but turn out, on inspection, to be about average. I’m not happy with my knees and I don’t like my name (that arle and oyle, the bloatedness). When in 1999 I read in a print interview Michael Hofmann saying ‘I have an overwhelmingly strong sense of who I am’, I was shocked (still am).

Then Jack. Jack because it’s flat, Robinson because – well, the name came in a flash, ‘before you can say . . .’ It was only later that I realised, or remembered, that I was allying myself to a whole tradition of Robinsons in fiction, poetry and film, all of them ne’er-do-wells or suspect in some way: in Fielding, Dickens, Conrad, Henry James, Céline, Kafka, Muriel Spark, Chris Petit, Patrick Keiller, Weldon Kees, Simon Armitage . . . (‘Know my partner? Old Robinson. Yes; the Robinson. Don’t you know? The notorious Robinson. The man who smuggled more opium and bagged more seals in his time than any loose Johnny now alive.’)

Jack-of-all-trades? Hardly. He’s no poet. He’s not a non-fiction writer because he likes making things up, but nor is he a novelist: he has a short attention span, he lacks stamina, he can’t sustain a plot and he’s not that interested in how characters develop. He writes short books, generally made up of fragments, in which fiction and fact bounce off each other. He likes table tennis, without being much good at it. He’s a bit frivolous, frankly. I don’t think he’s married. He can be forgetful (as I can: I’d forgotten, until the review of by the same author reminded me, that I once described CBe as ‘a small machine for reading aloud to strangers’). He’s not good at joining things up (he can just about do joined-up handwriting). He has a problem with endings. (The review remarks on how many of the paragraphs – ‘It’s hard to describe these sequent pages as “episodes”’ – don’t so much end as simply stop: ‘Robinson’s paragraphs run for as long as their thoughts do, and then stop running’.) He’s stubborn: knowing that he’s not a ‘natural’ novelist/poet/journalist, he still insists on writing.

Jack is noticeably impatient. (I’ve never really understood why patience is generally reckoned a virtue: sometimes, yes, but by no means always.) The gestation time of each of Jack’s three slim books to date has been short: Days and Nights in W12 was written over a couple of months, Recessional over a few weeks, by the same author in around ten days. The work Jack is attempting right now is different; it dates back to my impulse-buying of a second-hand copy of a translation of Stendhal’s Memoirs of an Egotist in a shop (now long gone) in Hammersmith in, I think, the late 1980s. (It was published by Chatto; D. J. Enright later recalled: ‘During my time at Chatto I managed to pull off US deals for two books I particularly liked. We printed copies of a new translation of Stendhal’s Memoirs of an Egotist for a firm that went bankrupt, and a book on the son of Anna (“and the King of Siam”) and his doings in the teak trade for a company called Thai-American Publishing that couldn’t be tracked down. End of my career as a whizz-kid.’) Marie-Henri Beyle – Stendhal was just one of his pseudonyms; he had hundreds – got under my skin. There’s a Stendhal poem or two in a poetry collection I published in 1993, and more in a 1996 collection, and a whole sequence in a 2001 collection. He won’t go away, still. This is a job for Jack. The book Jack is proposing is about Stendhal and death, loosely, and it’s taking longer than usual because each time Jack finds what he thinks is an appropriate form it collapses in on him. 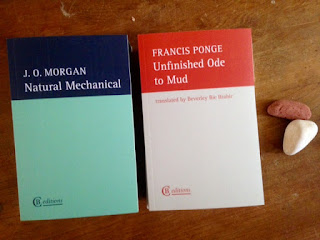 The first reprinted batches of CBe books in the new look are now in – shown above, alongside the pebbles from Brighton beach that cued the colours for the Ponge. Apt, given that the longest (prose) poem in the book is ‘The Pebble’: ‘a pebble is a stone at the precise moment when its life as a person, an individual, begins, I mean at the stage of speech.’

The reason for the new look is in a previous post. A retro look. Not-too-happy memories of academic paperbacks of, say, the 1990s. Happier memories of the two-tone mobile library van that came round to the village in Yorkshire where I grew up in the 1950s. The below is a 1968 Orkney Islands library van – the one I remember was brown and cream, a swooshing curve dividing them, and that I can’t find an image of it – or even something like it – on the net is a reminder that the net is not a repository of ‘everything’, in fact most things are not there at all.

Some of the first books I read came out of the library van. I didn’t know that I was supposed to start a book on page 1 and then read through the pages in consecutive order – I thought I could start with the chapters that sounded most exciting (‘The Pirates Attack’) and then get round to the others if I was still interested. This still seems a valid and perfectly reasonable way of reading a book.

For any new orders of J. O. Morgan’s Natural Mechanical, the above is what you’ll get. For Francis Ponge’s Unfinished Ode to Mud, trans. Beverley Bie Brahic, there are still a few old-style copies left (so, for a while, you have a choice). The insides are the same. That you may have already got these books is of course no bar on ordering them again.

I mean, those little single-para biogs that usually appear on the very first page of a book, or on the back flap if it has flaps. They are introductions: reader, meet X, who lives in Gothenburg. There’s not room for much more info, but often they list an author’s previous titles (which are listed again on the second page, in case your memory is seriously short-term), and if relevant a prize or two (many of these with strange names: the Scottish Mortgage Investment Trust award, the Ballygowrie Prize for Irrelevance). Plus, optionally, something on marital status, children, pets; previous jobs (fur trapper, peanut vendor); and a surprising number of writers still divide their time between one place and another.

CBe tends to be relaxed about these. ‘Patrick Mackie lives in Gloucestershire’ is all you get at the start of The Further Adventures Of The Lives Of The Saints (launch party at Daunts in Holland Park this Tuesday, 3 May, 6.30: if you’re curious to know more, come along). There are no author photos on any of the books. Two of the books carry no biographical information at all. In the case of Andrew Elliott, when someone requested life info and a photo I simply sent a photocopy of his poem ‘Self-portrait in Shades #2’ (from Mortality Rate). It has been rumoured that I am Andrew Elliott. I am not. On the other hand, I am Jack Robinson and Jennie Walker (‘has published, under a different name, several collections of poetry’).

I don’t think a lack of information need be confusing. I don’t think it really matters. I’m aware that many people do sometimes want some cut-and-dried hard facts about the author of the book they are reading. In the interests of clarity, here’s a screenshot of a website’s reply to a request for information about the CBe (and now HappenStance and Cape) writer J. O. Morgan: 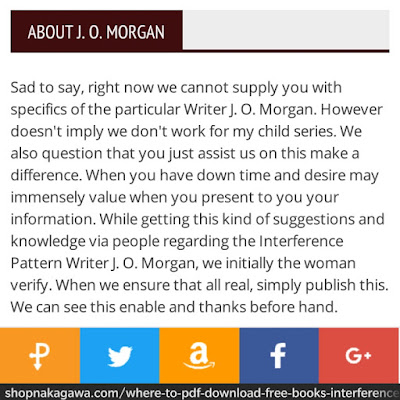 PS: a fine review of Julian Stannard’s What were you thinking? is published in the Herald today, this bright May morning: http://bit.ly/1UphbbM

Christopher Reid, The Song of Lunch

Charles Boyle, The Other Jack