42 February 2016: the new people at the post office are at the counter and the queues are long this week. Farewell to Jay and his wife (below), after 43 years’ service. Every single CBe book ordered from the website since 2007 – a number in the thousands – has been taken by me to their counter for weighing and posting. I’ve seen them at least three times a week, often more. Unwittingly, they have been by far my most regular co-workers in this little venture. 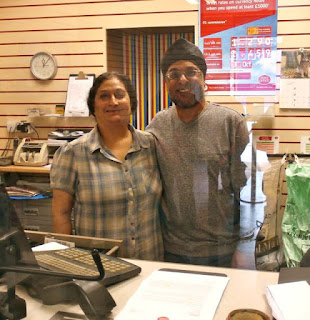 43 A rough audit of how the writers I’ve published have come to me. Author recommended to me by a writer already on the CBe list or by a close friend: 13. Me knowing an author’s work or coming across it and chasing it: 11. Unsolicited submissions: 6. Submission through an agent: 3. Can’t remember: 1.

44 Submissions: despite the huge amount of time and effort that they have put into their writing – and in many cases money too, in fees for CW courses – the great majority of people sending me work skip the 30 seconds of online research it would need to find out who, actually, they are sending to.

46 Money is necessary and also embarrasses me. Here is Anne Carson’s theory of money: ‘It’s just the inverse of the usual theory, which is that all money, indeed all numbers in life, should get to be bigger. But it doesn’t make sense that they should get bigger – why bigger? – so if you just switch it around and think all numbers should get smaller, it makes life better.’

47 I’ve hardly evolved from the times when ‘debt’ carried a lingering stigma and the purpose of a man was to be a ‘breadwinner’. As a writer (and especially as a writer who wanted to start a family), either I had to write books whose sales made me a living (which was never going to happen), or I took jobs and wrote on the side. (The oldest writer on the CBe list, Fergus Allen, 94, had a similar outlook: a working career, then publishing his first book at the age of 72.) I don’t claim this attitude is ‘right’; fear is involved, and playing safe. But I do take a perverse pride in CBe’s record of publishing more than 40 books over 9 years without any ACE money.

48 2014 was the glitzy year: Beverley Bie Brahic winning the Scott Moncrieff Prize for her translations of Apollinaire; May-Lan Tan on the Guardian First Book Award shortlist; Will Eaves on the Goldsmiths Prize shortlist; a re-issue of Agota Kristof’s The Notebook selling well and being on several ‘books of the year’ lists. I wore a tie.

49 This: different writers I’ve published meeting one another – at a reading, an event, a party, or just online – and clicking. Readers too. I could very easily get sentimental about this. Family. (Despite families being, in media-speak, either ‘hard-working’ or ‘dysfunctional’.) This kind of by-play has been the richest thing.

50 Social media. Facebook aggravates, and I aggravate in return and get in a mess. Twitter’s lighter, funner. CBe has, I think, a low-level, intermittent core following, some of whom do one platform but not the others, some of whom read the irregular newsletter but nothing else, and a least a couple of whom never go online at all, so I probably do need to keep all the channels open, a way of reminding that I’m still around. That’s all.

51 Ebooks. The books about Finland are available as ebooks because there may be English-speaking potential readers in Finland who are keen to buy but baulk at the postage costs for a printed book. Two of my own poetry collections, first published by Faber, are now available exclusively (as they say) as CBe ebooks. Take-up has been less than tiny.

52 Printed books are the CBe thing, but I’m not 100 per cent Luddite. I read a lot of things – poems, prose – online. Online writing doesn’t need to bow to the design restrictions of the printed page, and this can get interesting; to publish a 64-page poetry book (the standard delivery system for poetry over my lifetime) and then issue it as a 64-page ebook doesn’t feel interesting at all.

53 UK orders from the website are free of any postage or packing costs. For orders from Europe (and yes, that does include Ireland) and ‘rest of the world’, there’s a little clickable menu on every book page that adds on a postage cost. It’s surprising – but maybe not – how many people ordering from outside the UK don’t see this. Do I send them a school-teacherly email asking them to send postage? Do I just shrug and send the book anyway? It depends on my mood.

54 I’ve done this twice: taken on an ‘intern’ and paid them a sum of money and then been stumped as to what to ask them to do.

55 Oh, yes: I got one of them to teach me how to make spreadsheets. But then I never followed through. The old system – writing numbers down in columns in a ledger – isn’t broken so doesn’t need fixing. 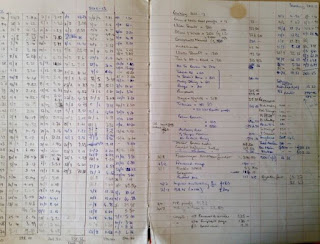 56 My dad (who died 60 years ago) had a ledger in which he kept track of the business of a farm he ran: wages, cattle bought/sold, tractor repairs, etc. I remember it, and have lost it. It seems pretty clear that I am trying to re-create that ledger. It also seems clear that the way in which CBe publishes – printed books; the lugging around of heavy boxes; the queuing at the post office; the tiny sums of money and the small-scale-ness of it all – is essentially a 1950s way, with a couple of technological advances (the internet, digital printing) added on.

57 The price of a new book of poetry should, surely, be index-linked to the cost of a packet of cigarettes. On the whole this seems to be the case. (Except for Faber: £10.99 for 64 paperback pages?)

58 I made a half-hearted attempt, about two years ago, to stop publishing. And then realised that, as with smoking, stopping is a lot more difficult than simply carrying on. But I can cut down.

59 The course of Sonofabook magazine, whose first issue was published in spring 2015, has not run smoothly: delays, illnesses. I came to believe that there was a curse on it. Someone suggested I rename it The Accursed.

60 In the agent’s office there is a cricket bat, and we talk about cricket as well as books. That this agent has poets on his list, and also the son of the teacher who got me through Eng Lit O-level at school, feels good. Minutes after leaving, I buy a bunch of Victorian lantern slides from an antiquarian bookshop. Two of them show watercolours of worms. I come home and read Darwin on worms: ‘Worms have played a more important part in the history of the world than most persons would at first suppose.’

61 Helpful tips. CBe author Dai Vaughan’s advice to ‘aspiring writers’: ‘Be sure that a life of humiliation and disappointment is what you really want.’ Me on lesser things: for editing you need to be awake and alert; typesetting can be done while reasonably hungover.

62 Burger vans (below). The left one is outside the printer in Acton, the right one is outside Central Books in Hackney Wick, the distributor. Snap. I collect boxes from the former, bring home and re-pack, and deliver them to the latter (17 trips in the past year). If just 2 or 3 boxes, by Overground; if more, by car. (Central’s building is perhaps my favourite in London: see photo in previous post.)

63 Inpress are asking me what my ‘targets’ are for the sales of the new titles. I have a feeling this is going to end badly.

64 Ron Costley, text designer at Faber while I was there, died in February 2015. Guardian obituary here. Anything I know about design, I have from him. When I wasn’t sure, when I had about six different ways in play of putting text to page or cover and had succeeded only in confusing myself, I’d email Ron and we’d go to Pizza Express. House red, extra chili flakes. He was a great supporter of small presses in general. It’s not the same without him.

Number 44, not bothering to look up the editor's name or even gender always floors me. The next time I get ' Dear Sir/Madam' I WILL delete!

Money's a funny thing. My friend John has an annoying habit of saying, 'It's only money!' whenever we've been stung by a restaurant after one of our monthly lunch meetings. Incidentally, publishers are always very quick to say that your work doesn't suit them without ever suggesting anyone else whom it might suit.